We arrived on our vacation three hours before check-in. The reason we’d chosen this particular neighborhood was for the fantastic pool – it was large and decked out like a resort, with rock features and waterfalls in the center of the pool and around the edges, a gorgeous covered area with legit outdoor couches comfortable enough to take a nap on, a big screen tv the size of my living room, a full and luxurious outdoor kitchen, and a four-story tower that was perfect for running up and seeing the ocean, the city, the sunset. 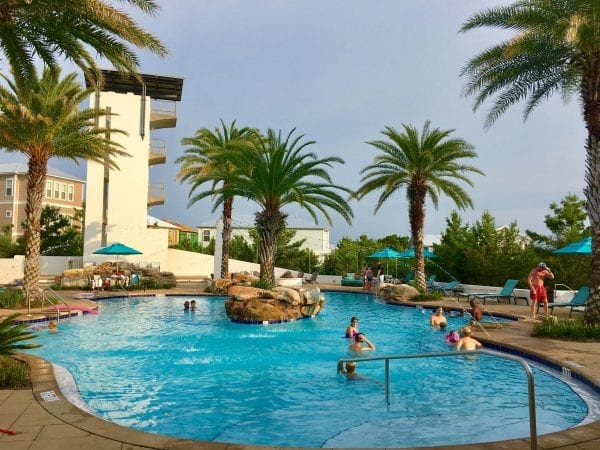 So since we were early, I called our rental agency and asked if we could go ahead to the pool – it had a gate code, which we had been given, but I wanted to make sure the code would work if we were early. They said that we could absolutely go – the gate code was good, and it was a great place to hang out until our rental house was ready.

So we grabbed our swimsuits and headed to the pool. The kids, happy to be out of the car, jumped in and began enjoying the wonderland of vacation. I curled up on the couch with a book, as my swimsuit was too hard to procure, packed in one of the bags beneath everyone else’s bags. But I was quite content to have a few minutes to myself.

About an hour later, I noticed that a very tanned, bleached-blonde lady in her fifties was talking very animatedly to Chris, David, and Ashley – all the adults on this vacation but me. I thanked my lucky stars for my forethought to hide myself deeply tucked into the couch and went back to reading.

Then one of them pointed to me and told her my name.

I paid closer attention and started catching snatches of conversation. Then she marched over to me and began a whirlwind speech.

“Hi. I’m Candi – the pool attendant. It’s against the rules to come before your check-in time and I should really kick you all out. I really should. I’m supposed to kick you all out. See, you don’t have your pool bracelets on and I’m not allowed to let anyone be here without pool bracelets. The whole city used to use this pool and it was just a mess. So we got the locking gates and they hired me. By the end of the week you’ll be SO glad that we have a pool attendant. I’m here to be nosy and keep order. Anyway, you need to have your bracelets, but your husband said that it wasn’t time for your check-in yet. I really should kick you all out. He said your rental company said you could come in and that was wrong – very wrong. I need to have a talk with them as soon as possible. Can you please provide me their name? And their phone number? I need to give them a call.”

I wasn’t given the opportunity for words edgewise or otherwise, so I simply provided her the name and number of our rental agency and prayed that God would have Mercy on Their Souls.

She disappeared with her phone, looking rather excited at her opportunity to go Five Star Pool General on a rental company, and the rest of the adults came over to where I was, looking rather dazed by the onslaught of Candi the Pool Attendant.

We were all enjoying a moment in the shade and a snack when she came back and restarted her impressive flood of words.

“I called and told them that what they did was wrong – very wrong. That you’re not allowed to come in here before check-in. I told them that they needed to let you in the house – even if it’s not ready – so you can get your blue bracelets so I don’t have to kick you out. They apologized. You should be getting a call from them….”

While she repeated this information in an endless loop, my phone began ringing. There was no possible way for me to pause her breathless assault of my ears, so I just let the call go to voice mail. I knew it was them, but I figured they needed a second to regain their composure anyway.

I finally escaped from Candi and walked out the gate to call them back. The woman that had been The Lucky One to receive verbal waterboarding from Candi picked up. I could hear the blush in her cheeks. She apologized and said they’d forgotten this was a “pool band neighborhood”, and that she was going to give me a one-time code to get into our house, retrieve our bracelets, and go back to the pool.

…Because if we didn’t have those Absolutely Vital blue bracelets on, our existence was def gonna poison Miss Candi’s pool.

I walked down the street to find our house. The door was already ajar because the cleaning crew was there. I tip-toed in and called out an apology, grabbed a handful of priceless turquoise rubber bracelets, and rushed back to the pool, quickly placing one on every arm in our group.

Candi happily bounced over, gushingly THANKING us for wearing our pool bracelets – something she proceeded to do to everyone she passed for the rest of the afternoon. She put on her most Professor Umbridge-Like wide and fake smile, looked each person in the eye, and said “I see you’ve got your pool bracelet on! THANK YOU for wearing that!!”

I thought that our Bracelets of Belonging would finally score us some peace at the pool, but I was wrong.

What it did is make us insiders with Miss Candi, and now she wanted to sit and gossip with me about all the things that proved her value.

….”There was this one time that a tall blond woman with the big hat and the expensive swimsuit – you know the type – (air quotes) – “Miss Seaside”, just walked on up into this pool without a bracelet on. I asked her why she was here. She motioned to her handsome husband on the golf cart – ‘Oh, we’re just checking the pool out.’”

(The story ended with Miss Candi kicking her out and in indignance saying to me “Now she had a fancy golf cart and a handsome husband – why did she need to be stealing our pool? Because that’s what it is, you know, if you don’t have a bracelet, STEALING.”)

…”The parents are just the worst. I have to keep an eye on all the kids. I usually see them trying to escape before the parents do. That’s why I check the doors all the time – to make sure they’re closed. Those parents aren’t paying any attention!!”

(She proved this by sprinting over every time a kid yelled or even squealed with glee to accusingly ask the parents “Are they okay?? What happened??”)

…And our most precious moment was when she told me that another reason she had to keep the miscreants out is because we as guests had permission to do anything we wanted … “and I DO MEAN ANYTHING” … in the pool tower – and we obviously didn’t want other people doing those things in our pool tower.

(Yes, Miss Candi, we DEFINITELY plan to use the pool tower for a spot of romantic liaison without any concern that you’re going to come up and ask to see our blue bracelets.)

…”The county mandates that no one eat or drink within 10 feet of the pool, but I want you to stay hydrated, so please have a drink (imbibe! It can be alcohol!) alongside the pool while you’re standing in it. But I will NOT allow you to walk around with your beverage.”

(Someone needs to tell Miss Candi that alcohol is not hydrating.)

…”You and your children MAY NOT play on the rocks or touch the rocks.”

(She proved how important this rule was later by charging bull-style at a family whose toddler got too close to the rocks – AFTER blowing her whistle – because of course she had a whistle – as loudly as she possibly could have point-blank behind my right ear.)

…”Don’t forget to use the TV! Do you know the code to get in the TV cabinet? Wow – you do?  Most rental companies don’t provide that! Surely you want to watch TV right now. It’s first come first serve so turn it on whenever you want!!”

(She followed this up half an hour later by questioning me again as to why I wasn’t watching TV. Because I had Miss Candi to watch. Why would I need TV??)

…”The rule on using the outdoor kitchen and tables is leave no trace – clean up after yourself and enjoy.”

(We ordered Pizza a little later. We threw away our pizza boxes. But three different times I heard Candi muttering behind me – “I said leave no trace. If you eat at a table clean it up. There are rags in the sink.” Finally I sent Ali over to get a rag to wipe away any invisible pizza crumbs so that Miss Candi would shut up. Which of course was an impossible feat to attain.)

…”No vaping because most people don’t understand that there is glass inside an e-cig and there is ABSOLUTELY NO glass allowed on the pool deck.”

(We laughed, but Miss Candi interrupted with “Oh I wish I could vape right now. I need a cigarette so bad.” We agreed – she definitely needed a cigarette.)

She assured us again that she was the best thing to ever happen to this neighborhood and we would be SO GLAD by the end of the week that we had a pool attendant. Because she added value-added services like OPENING THE GATE for us. AND CHECKING ON OUR CHILDREN.

I wasn’t sure if Miss Candi was going to be the most entertaining part of my week or the most annoying part. There was a very fine line and she was tightroping it very with grand determination.

She regularly went from dancing around the pool deck and applauding people for having mimosas in the pool to angrily running at a child who happened to be two feet from his parents just to return said child accusingly as if the parents were the worst humans ever. She would go from encouraging someone to turn on the TV! Enjoy yourselves! To manically demanding to know “WHAT IS THAT?!?!?” to someone who had brought their own karaoke machine. Then upon realizing what it was, giving a little approving dance shimmy to show just how crazy fun she was.

But it was her smile that was the scariest part. It was wide. It was toothy. It screamed out “I’m teetering on the edge of my own metaphorical swimming pool of boiling lava and if you push me over that edge I will drown you in the hot tub but only 8 people are allowed in the hot tub at once so I’ll have to ask two to leave so that I can put my feet in to get a good angle to hold your head under the water.”

But as long as we had our blue bracelets, the rules clearly stated that we could not be drowned by pool attendants.

5 thoughts on “Too Much Candi In the Pool”