On Friday night, I found myself putting on makeup while squinting at a tiny Lego Minifigure for reference. The night before, I was designing a hoodie and yoga pants – while studying that same minifigure to guide my fingers.

There are far too few times in life that this occurs, but our family made the most of our big opportunity.

Because here’s the deal: We are a Lego Family. My husband has loved these bricks since he was a child, and even claims to have somewhat decided his career based on them (“My job is just like building Lego – except with 3-D computer models instead of by hand.”)

In addition, we design a trunk for our church’s Trunk and Treat every year, always themed around something quirky.

So the fact that The Lego Movie came out this year meant that this was his chance. His chance to enter into every childhood fantasy, and to show off his mad brick skills to the world.

First, our costumes, as compared to the movie characters: 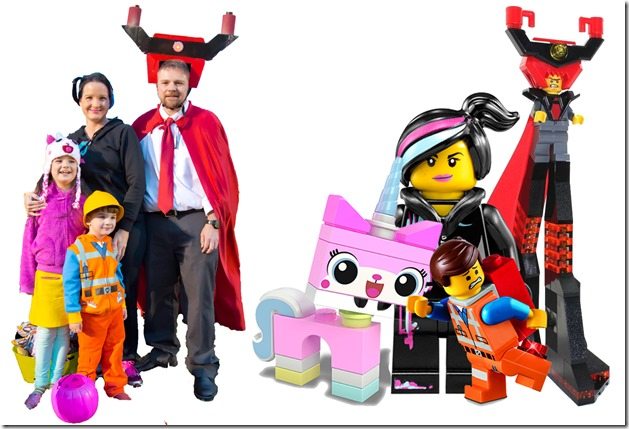 Ali is the ever-positive Princess Unikitty, Noah is “The Special”, also known as Emmet. I am WyldStyle, later identified as Lucy, and Chris is the villain, Lord Business.

If you’ve seen the movie you understand why Chris had to be Lord Business.

Because he is Lord Business.

My Lord Business stayed up until 1am two nights in a row designing this for the back of his truck – out of his own Lego (and a few from the kid’s collection.) 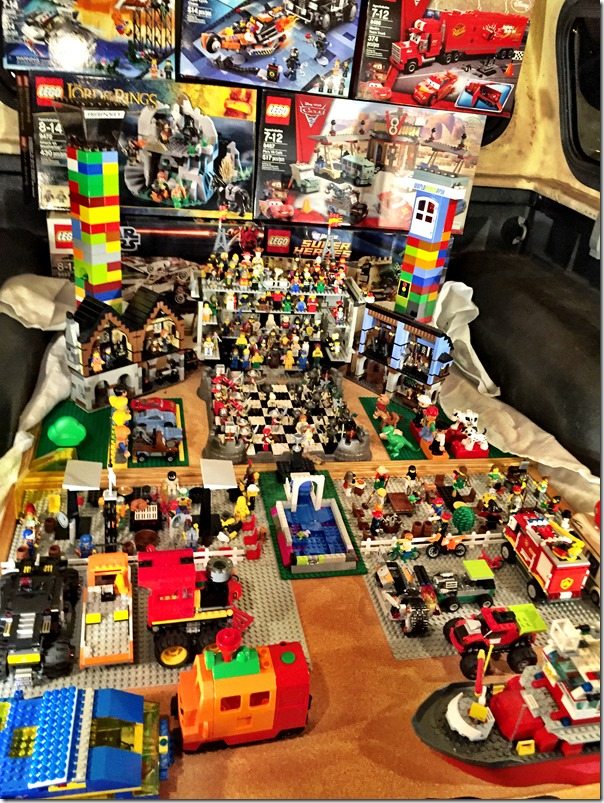 I watched him meticulously design a diorama so complicated that no passing kid at Trunk and Treat would ever fully absorb it, but such trivialities don’t matter to Lord Business. 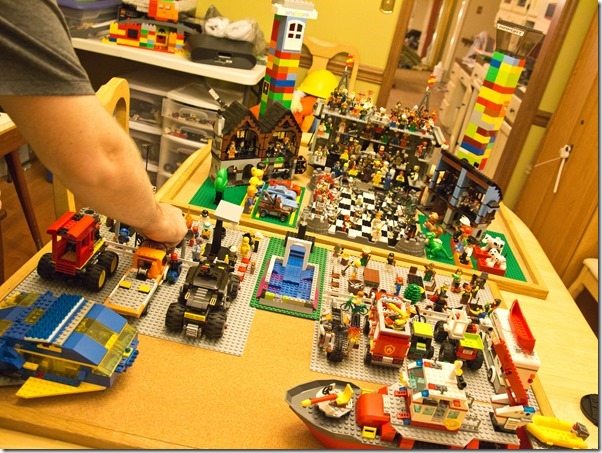 Luckily for you, though, I am here to explain it.

The concept is that there’s a stadium with screaming fans. The game being played is Chess. 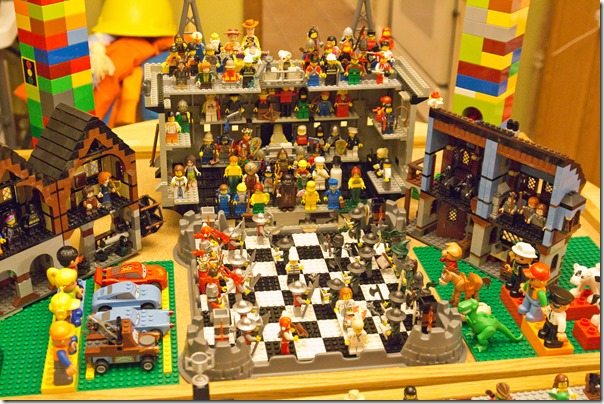 Like football, Chess can be brutal, requiring medics and stretchers. 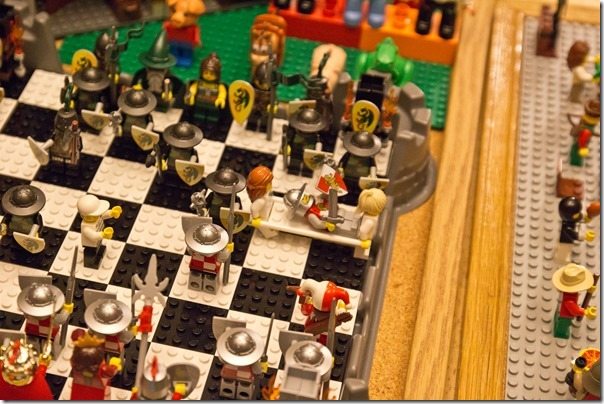 In the stands can be found all pertinent, themed, and slightly sketchy minifigures. 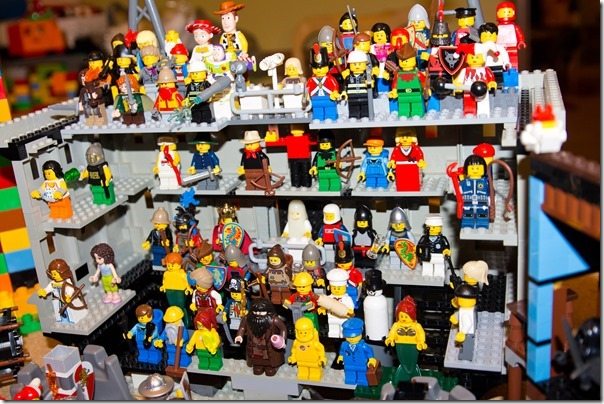 (Chris put me in charge of assembling the minifigs, and I might have enjoyed my job a bit too much.) 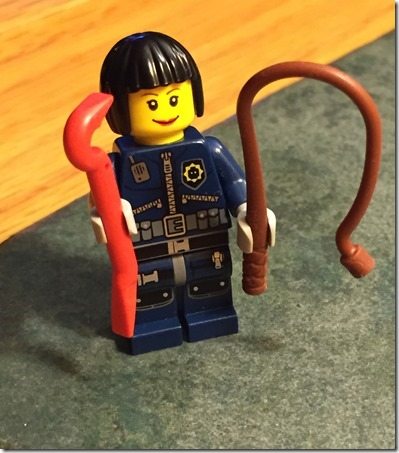 Some were important enough to get skyboxes, such as the stars of The Lego Movie and important Hobbits. 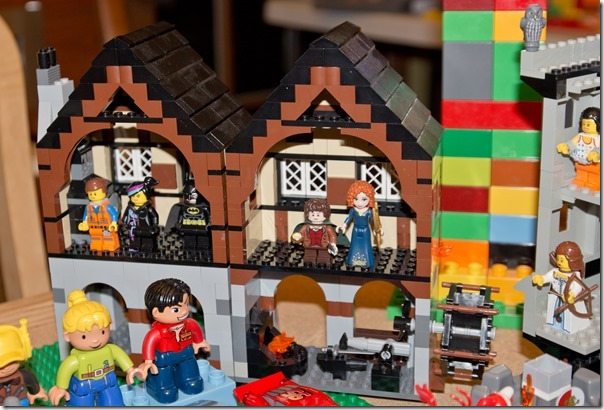 And others perhaps took their skyboxes with dark magic or by practicing the spells they were learning in school. 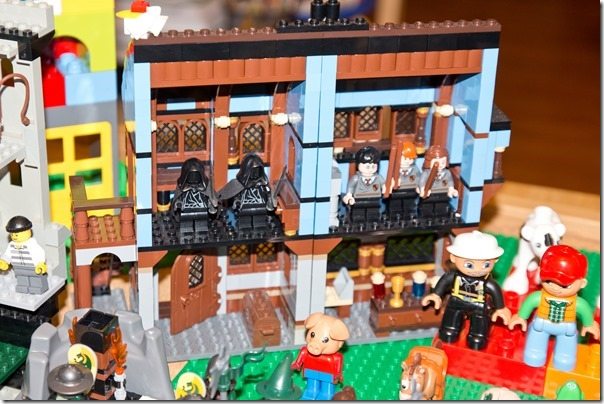 In front of the stadium are the tailgaters, and perhaps those that didn’t pay for an actual ticket into the stadium. 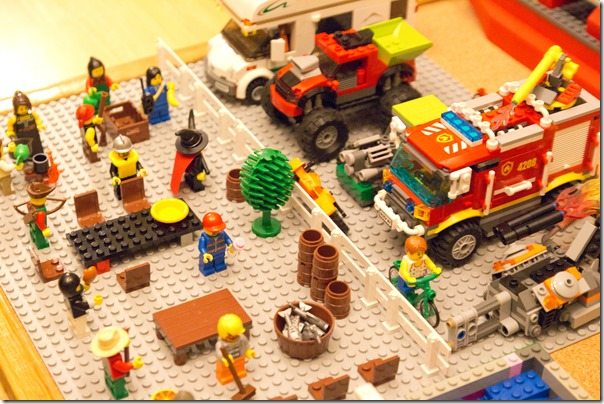 And of course at every good tailgate, you have a satellite dish and a Grillmaster. 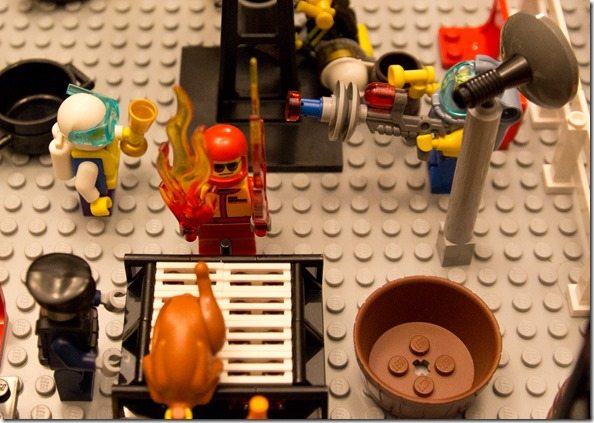 (There are so many layers of Chris in this project. So. Many. Layers.)

He set it all up in his truck, along with exact replicas of the signage around the Lego sets in The Lego Movie. 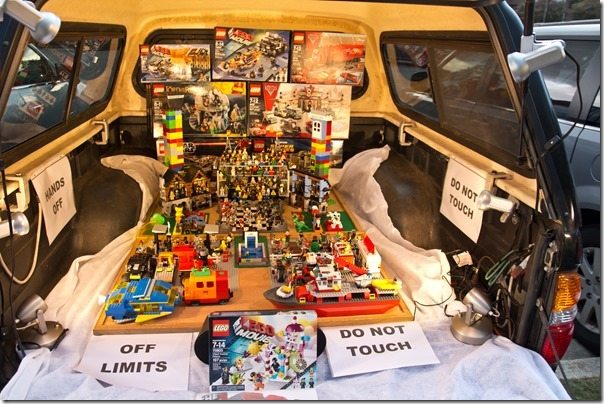 “But babe, some people will see those signs and not get The Lego Movie reference and just think you’re being a turd.”

“That’s okay. Because I’m half serious about the signs, too. I don’t want all those kids trying to touch my Lego!” 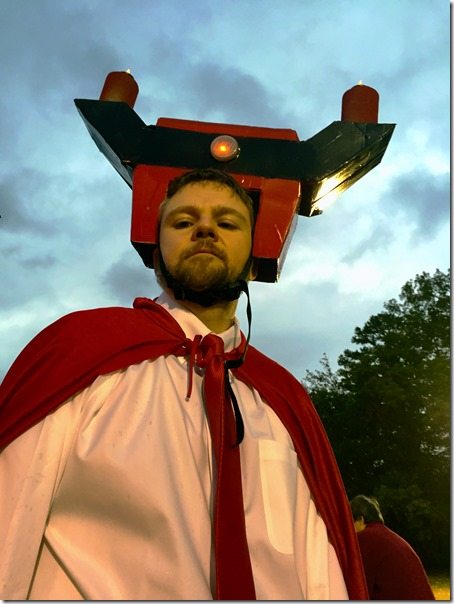 His bravery gave me strength: If he could risk the exposure of his Lego to thousands of juvenile passerby, then I could do my part, too. 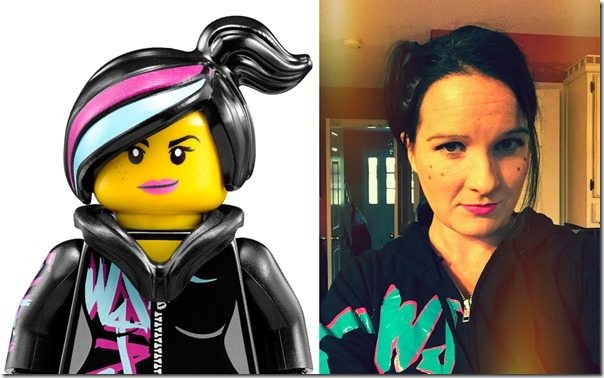 (I had to add my pink and blue hair once I arrived to meet him, as the ones I ordered from Amazon didn’t come in, and I spent all day Friday at the doctor and had to send Chris to Sally Beauty Supply to buy my hair extensions. I knew he’d do it because he will do anything thing for [Lego] Love.) 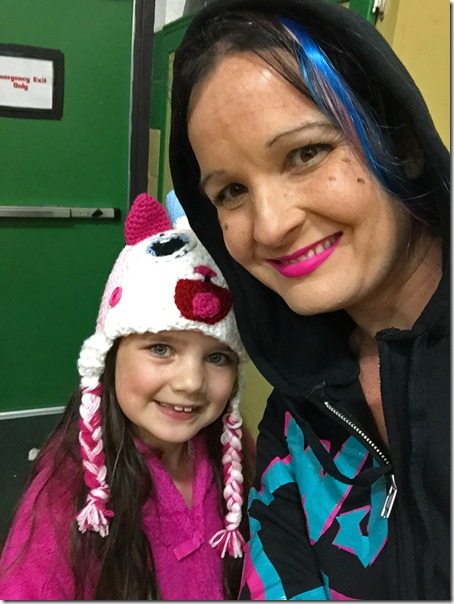 Noah was Emmet all the way down to The Piece of Resistance, which Chris rubber-banded and binder-clipped to his back. 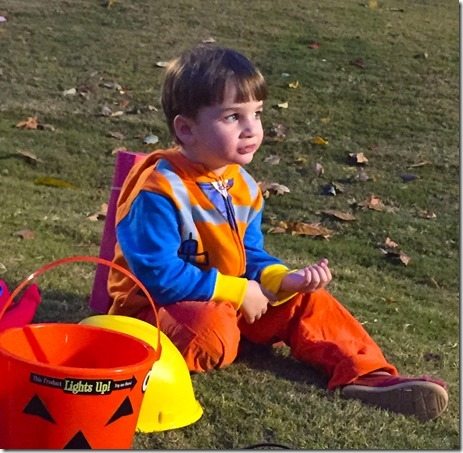 And Ali was a fantastic Princess Unikitty thanks to an amazing blog reader and master crochet artist, Stephanie, whom I texted less than two weeks in advance, and she miraculously created this masterpiece for me: 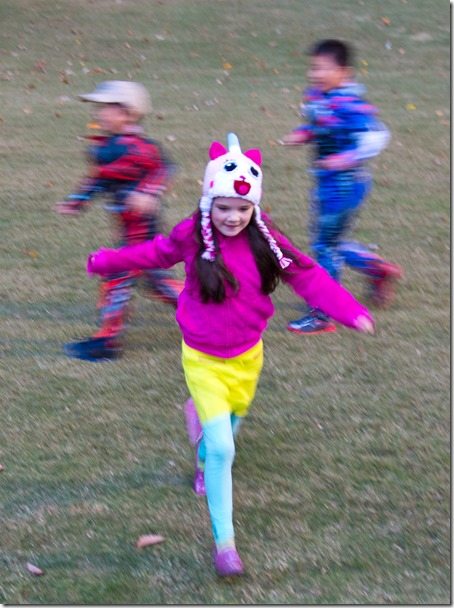 (I added the braided tail. Because that’s the extent of my construction capabilities.) 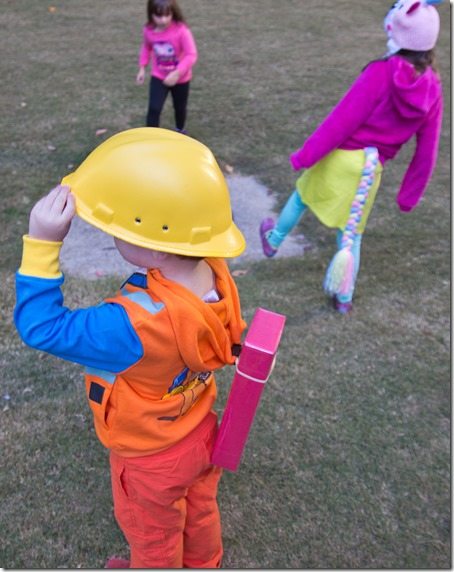 And then we got to work. Handing out candy to hundreds (thousands?) of kids, 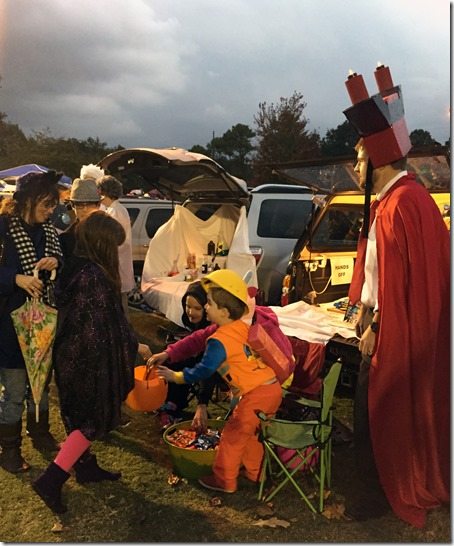 and torturing our children with the sudden cold snap that came just in time for Halloween. 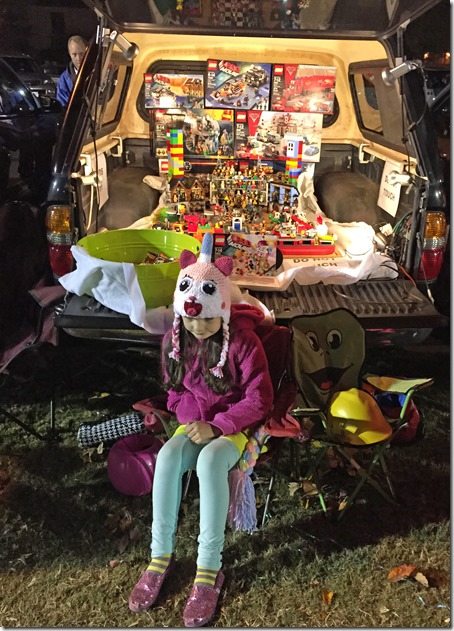 That night, as I tucked Noah into bed, I was asking him about all of his favorite parts of the event.

“What were your favorite costumes?”

Sleepily, he answered me, “I only liked yours, Mom.”

The next morning, Noah woke up and squealed, “Daddy said we could play with all the Lego tomorrow and now it’s tomorrow. All of them!! ISN’T HE NICE?!?!?” 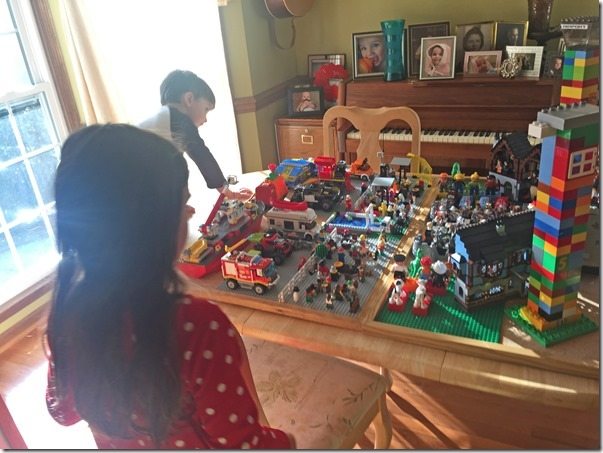 So maybe he’s not a total Lord Business after all.

– Clearly, we have a lot of minifigures, which are really the most fun part of Lego in my opinion. To create this giant collection, I bought Chris these minifigure sets three Christmases in a row. They have fantastic characters in them, and, in Lego standards, are inexpensive (well, two out of three are, anyway.)

– Thanks to the overcrowding of Frozen costumes this year, Lego Movie costumes were impossible to find (which made us the only Lego Movie characters that we saw all night, so at least we were unique.) Noah’s jacket, however, I found here, and I’m sure he’ll wear it every other day for the rest of the winter. Ali’s hat was custom crocheted for her by Stephanie at Spring Valley Special and quite reasonably priced, and I am positive it will be Ali’s go-to winter hat. Chris made his headpiece out of a couple of UPS boxes, a Lego Store container top, a couple of styrofoam cylinders, tea lights, and spray paint. If he wears it all winter, I’ll let you know. I created my outfit with a black hoodie and multicolored duct tape, and some pretty fabulous hot pink lipstick.

20 thoughts on “The Night We Turned into Lego.”