Okay. Now, with all of THAT out of the way…

Chris and I are headed out today for our second biggest Super Date of the year!! Ali will be blissfully staying with Gramamma and Pop, and we’re headed to Atlanta for our Second Annual Season Opener Football Trek.

If you want to know what we will be doing, check out last year’s posts about our crazy Greek Restaurant belly-dancing tradition here, the other “fanatics” that we will be sharing downtown Atlanta with here, and the game itself here.

Yes, many adventures will be had.

However, hopefully no adventures on the road there and back. Chris is a very cautious and safe driver, so he always drives on the way TO a destination, while we unwind and relax. And I’m a very bat out of hell “efficient” driver, so I always drive on the way home to get us back as quickly as possible.

And I will never forget my “efficient” driving origins…

For the record, I come by it VERY naturally. My Granddad raced mini cars. My Dad builds antique race cars. Dad is also a tech inspector for the Le Mans series races.

But it was my older brother who taught me the all-important skill of cop watching.

I remember it fondly. I was 14 and he was 16. He went to the Christian School at our Church and I homeschooled. He had a track meet, and had wanted to take me along (he actually liked me!!), and we got our plan cleared with the school beforehand.

But, apparently the person who gave us said permission was the wrong person in the chain of command.

When we arrived at school, we found out that due to insurance regulations, a non-student was not allowed to ride with the team. AND that he wasn’t allowed to drive his own vehicle, either.

At the risk of leaving his poor little sister alone at school with no way to get back to our Mom, he fought for our rights. By this time, the team had long left, so when the Principal finally realized the Catch-22 we were in (and, since JC WAS a star member of the team, the Catch-22 that the SCHOOL was in), he decided to let him drive.

Of course we were running very late, and the meet was well out of town. So JC had every excuse in the world to do what all teenage boys do with or without just cause: speed.

Since we were in SUCH a hurry, he decided that to achieve our goals in the most effective way, it was time to train his little sister in the ways of cop watching. And so I became the wing-girl as he repeatedly put the “governor” to work in our parent’s hot, matte light blue, Nineteen-eighty-something Ford Aerostar Minivan: 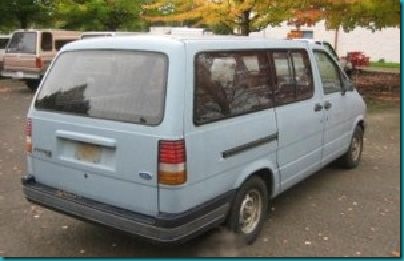 And now you know why I have such an aversion to minivans.

(By the way, if you don’t know what a governor is, it’s a speed limiter that was put on cars in the 80’s to keep teenage boys from going too fast. It actually CUTS OFF THE ENGINE if you get to the magical number. I believe ours was around 92 mph, but I’m sure that JC could confirm the exact speed of purposeful engine failure, since he and the Guv were best of friends.)

Anyway, we made it to the track meet relatively on time (and un-ticketed, thanks to my newly discovered natural cop-watching abilities), and I got some very important schooling that day, thanks to the principal who was able to see PAST the school rules.

JC – I hope that Mom and Dad don’t decide to retroactively ground you for endangering your little sister’s life in such an educational way. But now that you’re 30 years old (not to rub it in or anything), I think we’re safe to let Mom and Dad in on the “fun” we had as teenagers, don’t you? I see a weekly blog series coming on….